On Erev Shabbos Mishpatim, 5752 (January 31, 1992) something was announced in the world that had no historic precedent: a decision by world leaders, in particular the leaders of the United States and of Russia, to reduce their weapons stockpiles.  The Rebbe speaks of this in the sicha, calling it a “new epoch in international relations — eliminating a state of wars between the countries of the world, illustrated by the reduction and destruction of weaponry…”

We see a promise of such things in the prophecies of Geulah, such as “They will beat their swords into plowshares and their spears into pruning hooks. Nation will not take up sword against nation, nor will they train for war anymore”, which “is a matter which will be through the actions of Melech Hamoshiach himself.”  That Moshiach himself, the Rebbe explains, is the one who brings about peace between the nations, until the point of converting weapons into means for supporting the population.

While one could mistakenly view this as merely a political development, the Rebbe points out that this is “a clear sign of the beginning of the fulfillment of this promise in the true and complete Geulah via Moshiach Tzidkeinu…we already see (a taste) and the beginning of the actions of Melech Hamoshiach on the nations“(!).  The prophet’s Messianic vision of peace between nations is beginning to be fulfilled, something which does not happen until the time of the true and complete Geulah, and which is brought about by Moshiach himself.  And it is happening in our times, in the eyes of the world!

The Rebbe further connects this with the Nosi of our generation, the Previous Rebbe, the Moshiach of our generation, because this development is connected with the United Nations, which was established in the same city in which the Previous Rebbe chose to settle.  [Note that the location of the United Nations building, United Nations Plaza on First Avenue in New York, was previously known by its street address: 770 First Avenue.]  That through the Rebbe’s efforts the task of refining the world has been completed “until the completion and finishing of all the avodah of our generation over 42 years…”, and we see it manifest in this decision of the nations of the world to reduce armaments, that “the entire world is fitting and prepared for the beginning of the actions of Melech Hamoshiach.”

There has to be, though, a recognition that it is not sufficient that such things as making peace and reducing arms make sense to the human mind, but that these are part of the promises of the Torah about the Messianic era.

The Rebbe drops another bombshell:

We could say that the decision and announcement by leaders of the nations of the world about the state of “beating swords into plowshares”, is a result of the decision and announcement of “the kings, the Rabbis” that “behold this one (Melech Hamoshiach) comes”, which begins with the halachic ruling (psak din) of my father-in-law Nosi Doreinu that we have long completed our deeds and avodah over the time of golus and we are already prepared to greet Moshiach Tzidkeinu, and also the psak din of the Rabbonim of the Jewish nation [who have ruled] that the time of the Geulah has arrived, “a king will stand up from the house of Dovid…we assume that he is Moshiach” until the state of “behold this is with certainty Moshiach” [Rambam, hilchos Melachim, ch. 11] — a ruling “from Sinai” which is drawn down and permeates the worldy dimension, to such an extent that the leaders of the nations of the world decide and announce in their own opinion about “beating their swords into plowshares”. 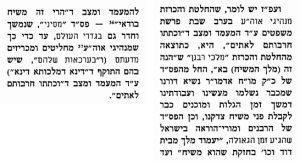 The leaders of the nations of the world came to their own conclusion that they should reduce armaments because a) the work of refining the world has been completed; and b) “as a result of the psak din* of Torah regarding the coming of Moshiach Tzidkeinu.”

We are witnessing the beginning of the fulfillment of a prophecy pertaining to the Geulah, which is being brought about by Moshiach himself through the instrument of the halachic ruling of Rabbonim. Because a halachic ruling is binding and creates the reality of the world, and a Rov must rule according to his own understanding and not “blind faith”, thus the psak din that Moshiach draws this down into the world with the power of Torah, creating a reality whereby the leaders of the nations of the world themselves begin to act in accordance with the prophecies of the Messianic era!

* The Rebbe is referring to a halachic ruling (psak din) signed in 5751 (1991) by a number of Rabbonim that Moshiach should be revealed.  Read the details in the booklet “The Facts Behind the Psak”.  In addition, there is a more recent Psak Din that the Rebbe is Moshiach, signed by over 100 Rabbinic figures, among them R’ Yoram Abergel, z”l, and the Biala Rebbe.]

Text of the Psak Din referred to by the Rebbe:

We, the undersigned, have already issued a clear p’sak din that in accordance with the Torah of Truth, the coming of Moshiach and the building of the Third Beis HaMikdash must happen immediately mamash. All the appointed times have passed, the Jewish people have already done t’shuva, and all the other required conditions for the coming of Moshiach have been fulfilled, as explained in the aforementioned p’sak din. Many of the great poskim of our generation in Jewish communities from every corner of the world have joined [this effort] and have signed this p’sak din.

Furthermore, according to the Rambam’s clear p’sak din in “Hilchos Melachim” 11:4, “If there should arise a king from the House of Dovid, who is expert in Torah, involved in mitzvos as Dovid his father, in accordance with the Written and Oral Torah, compels all of Israel to go in its path and strengthen it, and fights the battles of G-d, he is presumed to be Moshiach. If he succeeds and builds the Beis HaMikdash in its place and gathers Jews from afar, he is certainly Moshiach.”

According to the law of the Torah of Truth, it is clear that this halacha of “presumed to be Moshiach” applies to the Rebbe shlita, as all the aforementioned conditions listed in Rambam have been fulfilled in the Rebbe shlita.

One thought on “Mishpotim 5752: Moshiach is Affecting the Nations of the World”